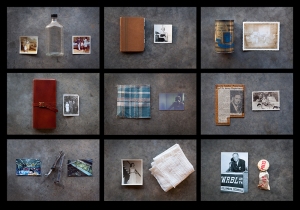 Artist Statement
I chose to open a closed box. This box found in storage contained disregarded objects retired from use—objects that I chose to archive and pair with similarly discovered photographs. The work functions by examining what is left behind, hidden, and set aside. This trail of once utilitarian objects creates a set of relationships which maps imagined people to objects. As each object is isolated they become distinct from a chaotic world of visual stimulus. Viewers examine the subjective memorabilia to question signifiers and reassess the function of the artifact in relation to the found photograph. These image object sets transform each other to produce synthetic relationships constructing a reassembled history—systematically repurposing contents into a new context. “Things” are cyclical–sometimes they are functioning; other times fading, expiring, decaying, and returning.